MY BATTLE WITH CANCER.

In 1998, I was running a computer company in New York. I also had an internet company in the Philippines and was in charge of a very exciting Internet Trade Show is Asia (Internet World). I was very busy and enjoying work but always made sure I got my yearly executive check-up, including my yearly mammogram. In February of 1998, I got a clean bill of health.

A few months later I began feeling a strange sensation in my breasts. By late October it developed into a sharp pain. I went to the doctor and was immediately referred to an oncologist for testing. I was told I had a very aggressive form of breast cancer and needed surgery immediately.

This came as a shock to me. I began to wonder why? There was no history of cancer in my family. Was it the toxic waste in New Jersey where I had lived for the past ten years? Was I stressed at work and didn’t know it? I thought there had to be a reason why people get cancer.

Before going through with a mastectomy, I wanted a second opinion. I went to a different specialist but he told me the same thing. I kept trying to find a doctor that would tell me I only needed a lumpectomy or just chemotherapy. Finally, the fifth doctor told it to me straight, “You don’t have a choice. We don’t even know if we can still save you! You are at stage four, the most serious stage, we need to do the surgery immediately!”

Here is was in February, cancer free, and now just eight months later I was knocking on death’s door with a very aggressive form of breast cancer. I went through with the operation and afterwards several months of chemotherapy. While doctors said that the cancer was under control, it wasn’t completely gone. So they kept me on medication.

I decided to go back to the Philippines for a visit. I owned a farm there that I loved, and had always wanted to grow medicinal plants. The farm was filled with coconut trees which were harvested for the copra. I thought about planting coffee under the coconut tress and start an herbal medicine garden.

Then in 2001, I began to experience painful headaches. They became so severe that it felt like the bones in my skull were being fractured. I walked into my doctor’s office and told him I wanted an X-ray of my skull. “We’re you in an accident?” he questioned.

He smiled, “How do you know you have a fracture? Maybe a stronger pain killer will solve your problem.”

He didn’t argue any further, and I had an X-ray taken. I went back the next day to see my doctor and instead, met with seven other doctors. They had never seen the type of skull cancer I had. Almost half of my skull looked like cheese that had been eaten by rats. I was in shock. I asked them what were my chances for survival? They said, “In the Philippines, at your stage….none.” I probably had two months.

I took the next flight to the United States. I went to see my doctor the afternoon I arrived. The doctors in Manilla had already faxed and spoken to him about my condition. The next day I visited with my neurosurgeon. We discussed my condition, and scheduled a craniotomy. My prognosis was poor. He ordered an MRI, CT Scans, bone scans, blood work etc. This was the same cancer that had so aggressively attacked me before. It had now spread up into my skull. Surgery was scheduled for the morning after.

The cancer was hairline close to the main artery in my brain. The bad news was that he could not take it all out; 20% of it was at the back of my skull in the centre over the main artery. Chemotherapy had not been successful after the breast cancer so there was little hope it would be of any use now. But at this point it was the only hope I had.

My chances for survival were grim. I knew I had better make the most of the time remaining. After several months of recovery from the surgery I went back to my farm in the Philippines to visit my family.

I was really weak and would just sit on the hill watching the farmers work among the coconut trees planting coffee seedlings. I knew I had to do something to strengthen my immune system. I wanted to plant an herb garden. I started doing research on what medicinal plants I should grow. I thought about planting ginseng or bitter melons. I even considered growing a shrub from the Amazon.

Just about that time, I came across some research on coconut oil. I read about clinical trials for AIDS in the Philippines using coconut oil. I figured if coconut oil can boost the immune system, and cure AIDS, it might work for my cancer.

I started taking 3 to 4 tablespoons of oil a day, plus whatever I used in preparing my meals. I would add it to my oatmeal in the morning, put it in my hot chocolate, cook my meals in it. I also snacked on fresh coconut and drank coconut juice.

By July my doctors started to worry. I had been gone for nearly six months. They needed to monitor the cancer that was still in my skull. So I flew back to the US. To their complete surprise I had gone into remission. They asked me what I had done. I told them I found a cure—virgin coconut oil. Today I continue to use coconut oil and I am cancer free!

I had grown up around coconut trees in the Philippines. My grandmother used to make coconut oil from fresh coconuts just as many of the farmers did. I never used it because we were told it was a saturated fat. We were health conscious so we used hydrogenated soybean oil or corn oil. I had coconut around me all my life. It took getting cancer and a desperate search for a cure that made me re-discover this miracle oil. 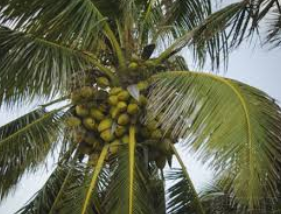